In the 1990s, people in this area had an optimistic outlook. The Fall of the Berlin Wall in 1989 followed by the collapse of the Soviet Union in 1991 and then the continuation of European – integration under the protection of the United States – set the tone. In 1993, the Schengen treaty (signed in 1985) entered into effect. This created an internal European market with free movement of capital, goods, services, and people. 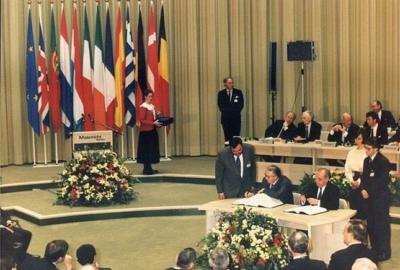 Maastricht in particular symbolized the European treaty that was signed in February 1992 and named in honour of the city. This treaty was the founding document of the European Union and the common currency, the Euro. This created global interest in the city.

Thanks to the incoming academics and its trademark as ‘Most European city in the Netherlands’, Maastricht was prepared for the elevation of its status. The university was established behind the beautiful façades of the many historic monuments in the city. East of the university, new districts arose as well as a new academic hospital. In addition to the price of land increasing, the touristic and culinary ambitions in areas increased. This resulted in a powerful middle class that became increasingly prominent in visiting retail chains as well as establishments that serve food and drinks.

As of 1992, Maastricht definitively bid farewell to its manufacturing industry, which had dominated this border city since the early 19th century. Companies operating in the manufacturing industry such as earthenware factories, glassware factories, and the paper factory were replaced by a renewed art museum, new highly educated audiences including academics, international students, and expats.

For example, the Maastricht Academy of Fine Arts and Design (ABKM) attracted students from West Germany. This meant that English as a second language of instruction became important. The transformation of this society into a ‘cultural society’ based on liberal values also allowed for more openness, between boundaries between sub-fields as well as between genders and across identities, which – while not new – were now more openly accepted.

Students also remained connected to the local alternative scene, a phenomenon in the 1960s started by artist group Artishock as well as by initiatives in the 1970s such as De Goede Kinderen and ‘t Bassin, all of which made the case for options for exhibitions in the city. 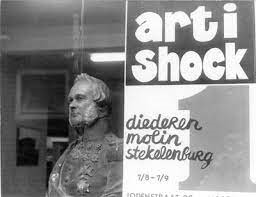