On May 25 1993, the Biennial of European Academies of Visual Arts was opened in the MECC with Queen Beatrix in attendance. The large hall in the MECC was furnished as an exhibition space, according to a design by lecturer Jo Sijen and visual artist and alumnus Jean-Pierre Zoetbrood; the opening event was graced by a spectacular show by Dogtroep. 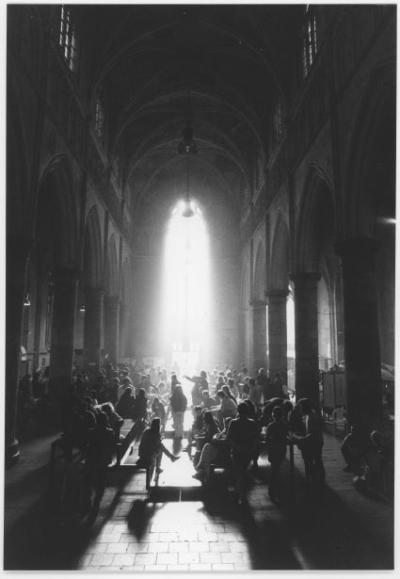 Dominicanenkerk meeting point for students and others during the Biennale

The organization set its sight high with the performance by Dogtroep: In 1992, the theatre company caused a furore at the Winter Olympics in Albertville and the World Fair in Seville, in 1993 at the Frankfurter Buchmesse.

This was the fourth edition of the Biennale, following Toulouse, Antwerp, and Barcelona in that order. The biennial event was organized by ELIA/European League of Institutes of the Arts.

The fourth edition also turned out to be the last in the series, in retrospect because of the enormous scale of the event and the high financial effort that required the help of many volunteers: other schools would not dare to undertake such a large-scale project.

The municipality of Maastricht, and its Mayor Philip Houben in particular, immediately reacted enthusiastically when the school proposed to organize this edition in 1991.

Ample funds were made available and permits were granted, so that Maastricht could also establish itself on the European map on a cultural level, after the Maastricht Treaty.

The school took six coaches with students and teachers to Barcelona, to learn from the third Biennale, which took place there in the run-up to the Olympic Games in 1992.

The Biennial in Maastricht attracted art students from 68 schools in 22 European countries including for the first time, participants who were previously on the other side of the iron curtain.

The Biennial was held from 25 to 31 May 1993. The event was organized by Projectbureau Biënnale ’93, which comprised a network working groups made up of students and lecturers of the ABKM all managed by a steering group.

The Dominican Church – which at the time was not yet used as a bookshop – was set up as a central meeting space, in which a monumental free-standing seating podium – another design by Jo Sijen – was the central element.

Each day, a free paper designed by the school under the leadership of lecturer Roy Hoet was distributed with information on all activities including:

- exhibitions and video presentations by the participating schools in the MECC,

- a Sounds Festival with works bordering between music, visual art and theatre, as well as the Cire Perdu project, all at various locations in the city,

- an Eastern Europe Festival in the Conservatorium,

- a forum discussion on the art situation and art education at the time, with important figures from the European art world such as Thierry De Duve, Freddy De Vree, Thomas McEvilley, Ryszard Stanislawski, Jon Thompson, and Anna Tilroe.

The main ingredient was the workshops for students led by prominent artists, such as: Anne Ausloos, Art in Ruins, Jo Baer, Richard Deacon, Droste/Rombouts, Luciano Fabro, Fortuyn/O’Brien, Veit Görner, Thomas Grünfeld, Fons Haagmans, Kazuo Katase, Gerhard Merz, Hidetoshi Nagasawa, JCJ Vanderheyden, Auke de Vries, and Lawrence Weiner. As far as possible, each workshop worked on a joint work of art, which was presented to the public at the end of the week. The well-attended workshops were held in various locations in and around the city. 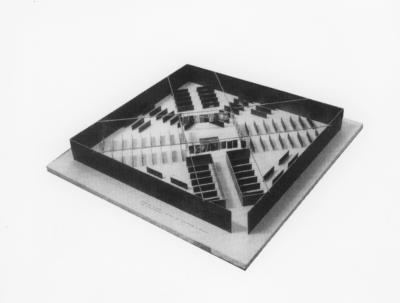 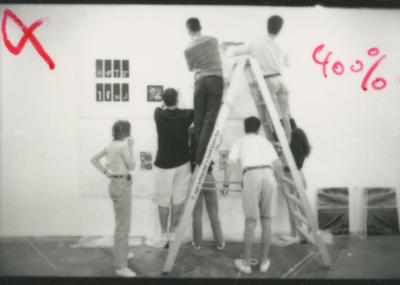 Installation exhibition Biennale in the Mecc 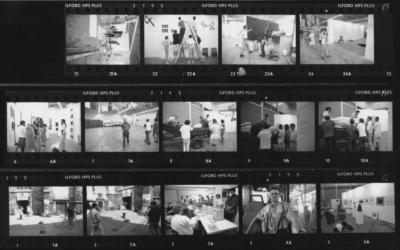 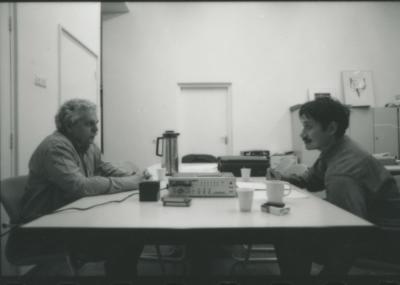 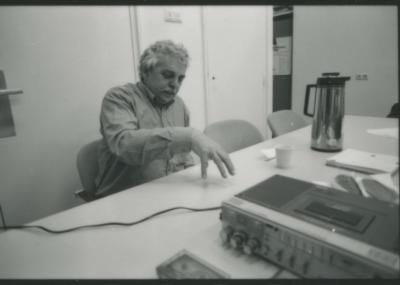 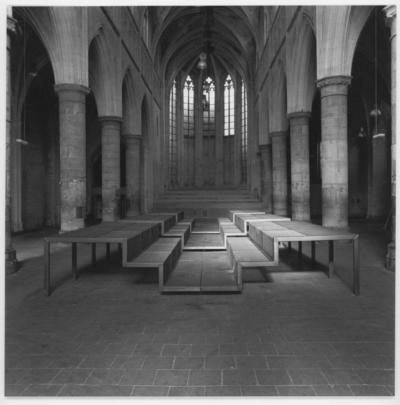 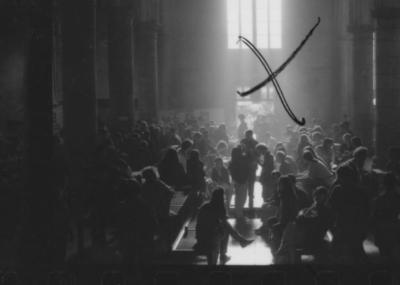 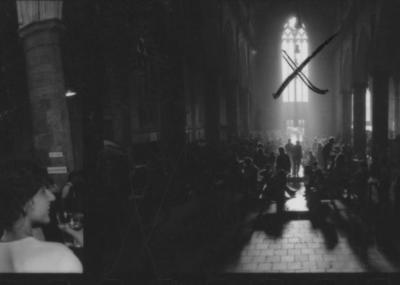 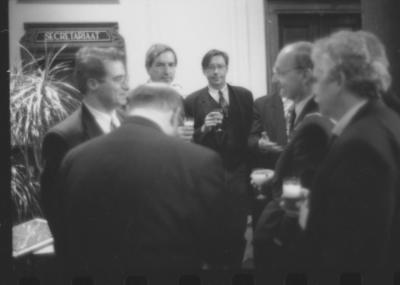 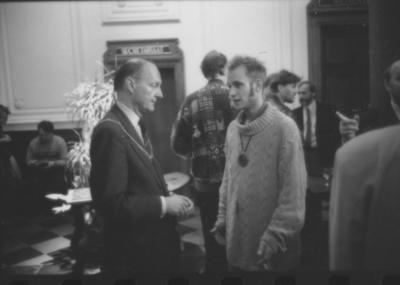 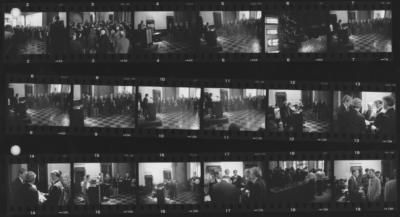 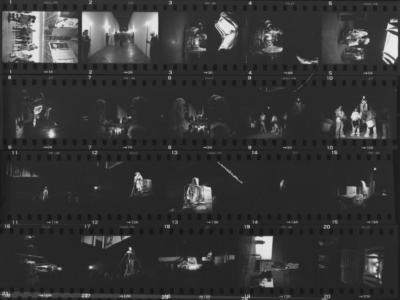 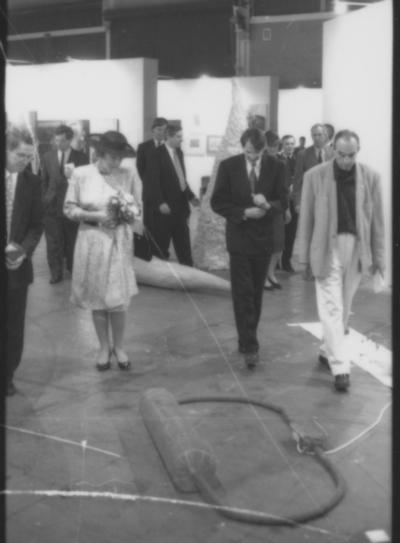 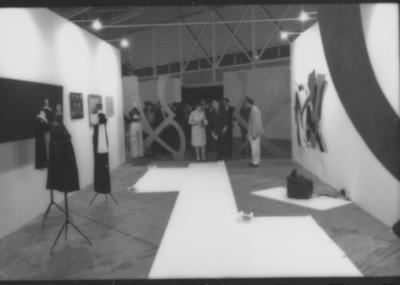 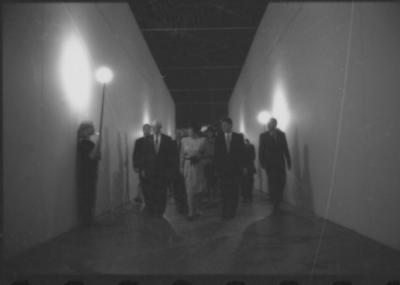 Biennale opening with the Queen, opening ceremony with Dogtroep 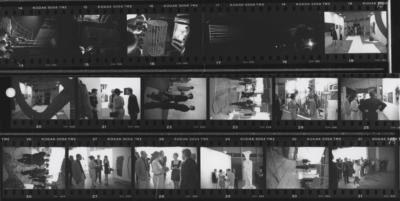 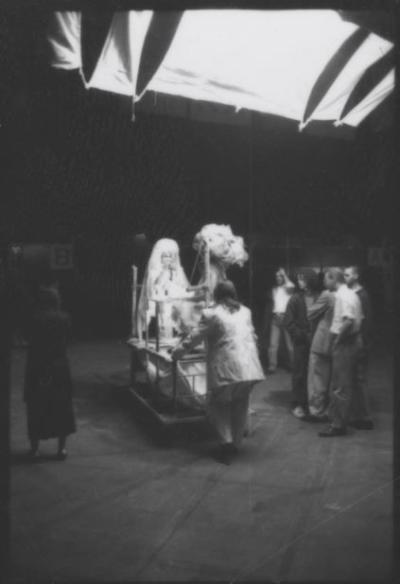 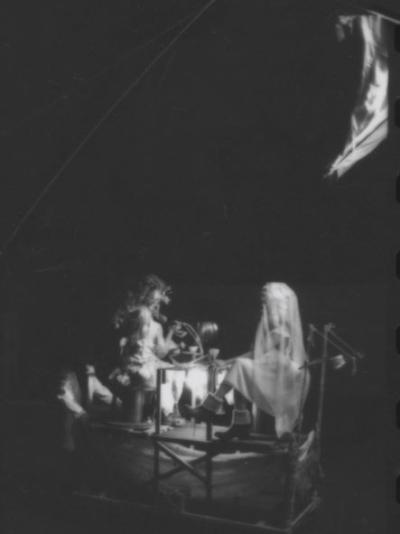