Designers should stop emphasizing obvious choices and instead entice people to make other choices that improve society. There are enough people who want to make a difference for a better world. But if you only protest in the demarcated and intended places or vote once every four years or sign various petitions, this will not bring the necessary change. All knowledge and technology is already available
for a better world. We know what to do and yet, it doesn’t happen. Designers have an important role in facilitating a paradigm shift. If designers want to facilitate a change in meaning, designers have to do something different. That is why I want to give designers the tools and possibilities to facilitate paradigm shifts.

My project is based on theoretical and experimental research.

Theoretical research has focused on social constructs and the
building blocks of a paradigm shift. As a designer you facilitate
the environment and context in which choices are made. This
environment and context are formed by the social construct and the current paradigm. A designer needs to understand the social construct and paradigm, to facilitate changes in it. Several steps can lead people to making bad choices. If the different steps can tempt people to make worse choices, they could also tempt people to make better choices. Theoretical, instrumental and experimental research together lay the foundation for a paradigm shift. If one of the three types of research are missing, the new paradigm is usually not
considered a possible new normal.

I conducted the experimental research through Design Thinking and co-creation. I discovered new perspectives, designers and knowledge. When the circumstances (the corona crisis) still allowed it, I was working several days every week at the Cube Design Museum and Groenergras. The last few weeks I have agreed online with the designers, researchers and stakeholders. I regularly organized presentations together with the CUBE design lab team, in which we critically assessed each other’s work and went through the next steps in everyone’s process. I was able to improve my work through
interviews and prototyping.Co-creation, experiment and play are different parts that are necessary in the design process if you want to facilitate a paradigm change. However, these are often forgotten and/or skipped by many designers. During the process I found out that a designer wants to facilitate a paradigm change, it is important that you tempt people to make better choices.

My experimental research has shown that it is important to be physically present. As a designer, you should view the old paradigm as a jungle of possibilities. It is important to go on a safari and experience the problems and obstacles people face when changing (or not wanting to change) a paradigm. You cannot do the future design alone, so it is important to
collaborate with stakeholders and experts.

I have designed a compass who helps designers facilitate a paradigm shift. By mapping out the different opportunities and possibilities required for a paradigm change. I visualized these possibilities in a metaphorical compass that serves as a roadmap for the process.The direction of the director will be different for every paradigm change. I have strived that my thesis is a playful collaboration between image and typography with a focus on detail, color and material. A map that gives direction to designers who want to change meaning.

My visual work is founded on theoretical and experimental research, on the basis of which I visualized my Direction Giver. The Direction Giver consists of three components. The main component is the compass.

The compass is a maze in which the designer can roam about among possibilities and inspiration. The illustrations in the maze are based on the various steps that prompt people to change their behaviour. I have grouped the different steps into three different layers. These layers symbolize the theoretical, experimental, and instrumental research needed for a paradigmatic change. I have provided a legend to enable the compass to be read properly. 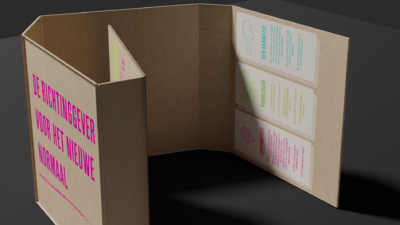 I have created Signposts to support the compass function. Similar to the three layers in the compass, the Signposts are also based on my theoretical, experimental, and instrumental research. The Signposts are rectangular cards with concrete questions and assignments for theoretical, experimental, as well as instrumental research. The designer can shift his or her focus from one signpost to another during the design process. During the process, the signposts can be hung on the walls of the workspace with a view to supporting a brainstorming session, for example.

I developed my direction giver to help designers see that they can be the architects of their own choices and contribute to a better world. My direction giver will help designers take the right steps. The route will be different for every paradigmatic change. It will make designers more conscious of the various obstacles and opportunities in relation to the changing of the significance, for example. This way, I hope to offer designers tools during the process of a paradigmatic change. It is important that we reflect on the choices we make and no longer remain passive when faced with evil. Society cannot do without design. Designers must take responsibility for social choices. Therefore, let us opt for a better world together by using design as a vehicle for change.