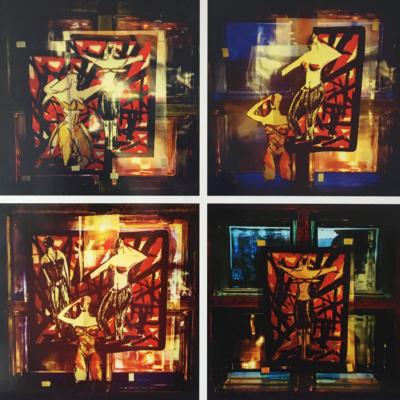 This work was made in a dark, actually the darkest period of my life. During my graduation in January 2018, my father died suddenly. That is why it took me longer to become a teacher in Visual Arts. This work is part of that time. During making this ‘result’ I worked intuitively, but I also thoughtfully. The black lines in the background of this expressive painting form a unity with the dancing women, Ravers, in the foreground, against the color and space of light. The cross in both the four expressive images and in the center symbolizes the love of God transferred to the world. Listening to Electronic Music is the same feeling of trance and freedom that I have always had. The text from the book by Wassily Kandinsky "Über das Geistige in der Kunst", page 99, is very important for this process: "We are faced with the need to develop a new dance, the dance of the future. The same law of the unconditional exploitation of the inner meaning of the movement, in its capacity as the main element of dance, will also work here and lead the goal there. Here too, conventional 'beauty' of the movement must and will be thrown overboard and the 'natural' process finally declared to be disruptive. No more than in music or painting, an "ugly sound" and an outward "dissonant" existence. That is to say: just as in these two arts every sound and coherence is beautiful (effective), provided that it flows from the inner necessity, soon the inner beauty will also replace the outer in dance. The not-beautiful movement, which now suddenly become beautiful, sprouts directly from an unsuspected power and lively force. From that moment on, the dance of the future begins. This dance of the future, which is placed on the level of current music and painting, will at the same time gain the ability as the third element to realize the stage composition which will be the first work of monumental art. The stage composition will initially consist of the following three elements: 1. Musical movement; 2. Painting movement; 3. Dance movement.