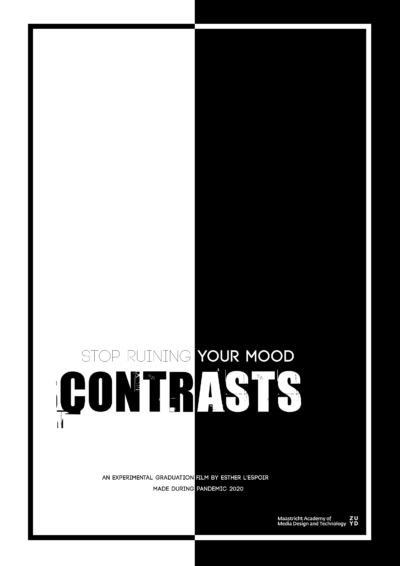 Contrasts An experimental graduation film made by Esther L'Espoir. Made during pandemic 2020

The theme of this film is polarization. Nowadays, polarization only leads to conflict. We attack one another about the stupidest things, argue with one another because we have differences of opinion, and turn every discussion into a contest – or even a war.

With Contrasts I would like to show people that I do not agree with the way in which polarization is currently being used in the world.

(Because the film still needs to be sent to film festivals, it has not been published online yet.)

In my article, I conducted research into polarization.

The main question I addressed is: To what extent can polarization once again lead to a constructive solution for society?

Polarization is the formation of contrasts. I have come to realize that polarization can certainly bring about a constructive effect, but to achieve this our society will need to change drastically. The media should pay less attention to polarizing conflicts; people should also take less interest in these conflicts. We should be able to look at things from both sides more often, and we should not make the conflict more important than the underlying problem. We ourselves should also be open to change. If we were to show more sincere interest in the other person and be more curious about one another, a polarizing conflict would be less likely to develop.

We have to use polarization as a vehicle for learning to know one another better, for understand one another, and finding solutions to and compromises for problems. This way, polarization could once again provide a constructive solution for today’s society.