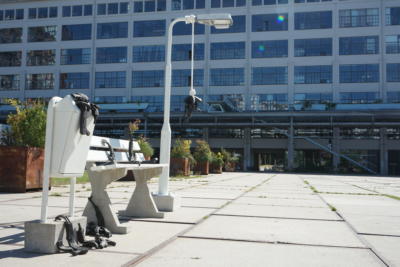 In the past four years, I have developed a fascination for firearms. Not in a positive sense, an adoration for it, but rather a resistance against it. A sort of anti-movement. The enormous amounts of firearms lead to endless violence worldwide. Each of them zeal for political, territorial, financial, physical or even mental power over the other. On the other hand, I am also sensitive to the shapes and technics of weapons. Their practical and visual developments. I became interested in the transformation of an effective device to an object with visual expression. Within my work I investigate how I can convert the factor of power in firearms into powerlessness. Disarm it, as it were. With this I want to show that real weapons are merely destructive and can be only used as such. That our civilization and development is slowed down, rather than accelerated by them. Or is it a necessary harm, in defense of our body and soul?

The installation The Object is based on a fragment from the public space. A civil scene of a bench, lamppost and trash can, as we would encounter them in a parc. The shape of it has deliberately been kept as basic as possible, in accordance with reality. A clear contrast should emerge between the street furniture and the specific addition of the weapon objects. These are made of baked clay and processed in such a way that they give a melted impression. The combination of this material and their physical posture, that of a rag doll, bring down the prestige and symbolism of the weapon. The weapons are not put at the ready or threateningly positioned, but rather have a listless pose. Almost as that of victims. All the weapons have lost their firepower and hang or lie lifeless. The scene should give you the feeling that firearms have reached their limits. Unusable for any battle or duel. Their original form and destructive function have been degraded to a purposeless matter. The summation Heads Up, becomes a joke because of this. Through this setting the impression arises that weapons are just waste and have been left careless.

In itself, the presence of weapons on the streets is not surprising. But the use of materials, the deformation and position of these weapons deliberately have an alienating effect. Unlike toy weapons, the illusion is unsatisfactory. They are hardly recognizable from a distance. Only when approached, distorted contours and shape properties emerge. And up close you come to the conclusion that these weapons no longer have any firepower.

My goal with this installation is to put the possession and use of firearms on the agenda. Making people conscious of their destructive function. If it were for me, there would be a global ban on the possession of firearms. My aspiration is probably idealistic. Inspired by the fact that I grew up in a safe environment. One that has made me to the person that I am today. That is why I want to address social issues with my objects and installations. Creating any hope in the violent world we live in today. So that we convince each other with argumentation instead of ammunition.

The purpose of this study is to find out how my vision of a word without firearms corresponds to the contemporary streetscape. I therefore conducted an in-depth study into the origins of this vision and the actual scene out on the streets today. A large portion of this thesis is also dedicated to the impact that firearms have on children. In our times, we are constantly having firearms foisted upon us on account of the underlying fear and the powerplay element associated with them. It seems as if the use of firearms is becoming more and more commonplace, even in our subconscious. However, this idea could be set aside as obsolete in 2020.

A study of the literature was conducted in an endeavour to answer the research question. In this, an answer is provided to the main question: ‘How does my vision of a world without firearms correspond to the contemporary streetscape?’. Several sub-questions were addressed:
1. What is the influence of the current streetscape, in which firearms, power, and freedom are prominent elements, on the way in which our children and the next generation are raised?
2. What is the impact of fear and complacency on the decision to use firearms?
These questions were answered with the help of various sources such as books, films, artists, sociologists, philosophers, and the internet.

The literature revealed that there are differing visions and opinions with regard to the subject above. The personal vision is fuelled and further developed by critically examining the ideas of others. The impact that firearms have on children – and therefore indirectly on future generations – is more widespread than anticipated. A considerable portion of my thesis is dedicated to the fact that the world as we know it today is described as the kingdom of fear.

A process of in-depth contemplation and innovation has made this thesis possible on behalf of the graduation project in the visual arts: ‘The Objects’. Offering my vision as a subject for discussion on the basis of the various sources I collected has ensured that I am even more convinced of the correctness of my vision and can substantiate this.
The entire process of this graduation phase was an experience from which I learned a great deal, and on which I can look back with a positive feeling. In summary, I could say that I hope not only to inspire the reader and the viewer of my work through the results obtained, but also to make them understand that we are in this together.